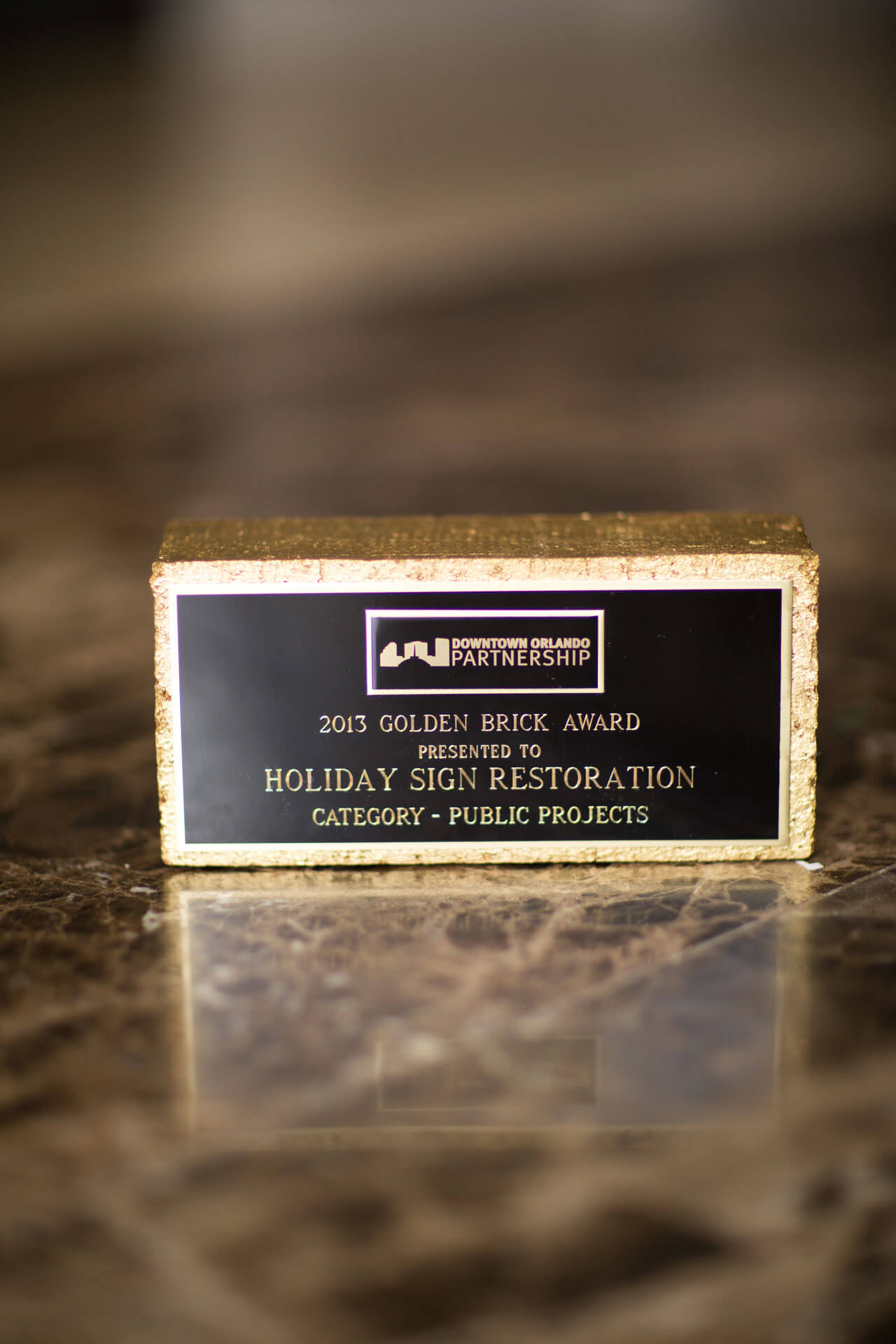 Orlando, FL – Ivanhoe Village Main Street received a 2013 Golden Brick Award (Category – Public Projects) at ceremony held at The Mezz in Downtown Orlando on April 3. The award was given in recognition of the successful holiday sign restoration project.

The Golden Bricks are awarded annually to recognize projects that have positively impacted the Downtown Development District, making the area more exciting, interesting and desirable place to work, shop, play and live. This is the first time Ivanhoe Village Main Street has won the award.

A beloved Orlando icon, the Happy Holidays/Happy New Year sign on top of the Historic Ivanhoe Building on Lake Ivanhoe, was restored at a cost of $50,000. The neon sign, composed of large letters, will once again usher in the holiday season for residents and visitors alike, as they arrive to Downtown Orlando. The sign will be lit annually on Jingle Eve, a special event produced by IVMS, which has an economic impact on the area of $200,000.

“Each of those letters is 12-foot high, but I honestly feel much taller than that right now,” said IVMS Executive Director, after accepting the award with Commissioner Stuart. “Ivanhoe Village Main Street is responsible for maintaining a fund to ensure the sign never falls into disrepair again and recognition such as this helps those fundraising efforts.”

About Ivanhoe Village Main Street
IVMS is accredited by the National Main Street Center and is part of the Orlando Main Street program, sanctioned by City of Orlando. The organization is dedicated to meaningful, long-term revitalization of Orlando’s cultural district, its abounding history, community aesthetic, and local business prosperity, through a collaborative cooperation and synergy with our businesses, residents, and partners.

What a Year in Ivanhoe Village!

Walking into Equilibre, you feel right at home. The bistro decor and plants give off a…

At Kut Shave Steam (The Sanctuary Hair Refuge), you not only get a high quality…